The Map Behind the Piri Reis Map

Piri Ibn Haji Memmed (c.1470-1554), better known as Piri Reis, was a Turkish pirate who later became an admiral (which says something about the Turkish navy of the time), and was eventually executed for treason. He compiled a detailed atlas of the Mediterranean, but is best known for his world map, drawn on gazelle skin, dated 1513. At some point this was cut in two, and only the half showing the Atlantic survives. A small part of another map created by him, from 1528, is extant. In 1988 the 1513 map was on display in the British Museum as part of an exhibition of sixteenth century Turkish culture.

﻿﻿﻿Although far from accurate, it is quite impressive for its time, showing the Caribbean islands and much of the eastern coastline of South America. Piri Reis wrote that he had compiled it from twenty earlier maps. The Brazilian mainland is decorated with drawings of animals, and a man with his face on his chest. Shakespeare makes Othello speak, whilst talking about his voyages, of “The Anthropophagi, and men whose heads do grow beneath their shoulders”. Evidently this was a common yarn at the time. Northwest Africa is shown as fertile, with lakes and rivers, when in fact it is largely desert. Of course, an admiral need only concern himself with coastlines, and not bother about what may lie inland.

The bottom of the map shows part of the Antarctic coast. It is drawn too far to the north, and is joined up to Brazil by a squiggly line, which seems to have been his way of indicating his guess as to what lay in the lacunae between his source maps. But it is nonetheless remarkable, in that conventional history has it that Antarctica was not discovered until 1818. The map also dates from before Magellan’s first round the world voyage of 1519-1522. (Actually, though it is attributed to Magellan, in the Philippines the natives killed him, and only one of the five ships that he set out with made it back to Spain. Nevertheless, this finally proved that the earth is a globe.)

In 1956 a Turkish naval official presented a facsimile to the U. S. Navy Hydrographic Office as a gift. Though the United States territory is not shown, it aroused interest as it was thought that it might have been based upon one made by Christopher Columbus. It was examined by a student of old maps, Captain Arlington H. Mallery, who came to a remarkable conclusion: the Antarctic coast showed features now concealed by the ice cap. Thus, it must have been mapped before the ice appeared, that is, perhaps 10,000 years ago. He consulted some other geographers, including the Jesuit fathers Rev. Daniel Lineham of the Weston Observatory of Boston College, and Rev. Francis Heyden, director of the Georgetown University Observatory. This resulted in a radio panel discussion on 26 August 1956. A transcript of this came to the attention of C. H. Hapgood, a Professor of the History of Science at Keen State College of the University of New Hampshire, who decided to do his own investigation. In December 1958 a debate on the subject was held at Georgetown University, and this was reported by the Fortean writer Ivan Sanderson in the January 1959 issue of Fantastic Universe (not seen).

Sanderson’s article was read by Louis Pauwels and Jacques Bergier, and summarised by them in The Morning of the Magicians (p.120). Some creativity had been added, however, as they related that “Father Lineham confirmed that the contours of North America, the location of the lakes and mountains of Canada, the coastal outline of the extreme north of the continent . . . were all correct.” Since the Piri Reis map does not show the North American continent at all, except for what seems to be the southernmost tip of Florida, this is hard to understand. Since they were interested in possible forgotten sciences, they then asked: “Were these copies of still earlier maps? Had they been traced from observations made on board a flying machine or space vessel of some kind? Notes taken by visitors from Beyond?”

Meanwhile, Hapgood had got his students involved with the project. They found some reasons for thinking that many mediaeval charts were based upon much older originals. Certainly, there were many copies of the map of the Mediterranean drawn by Ptolemy in the second century.

In the Thanksgiving recess of 1959 Hapgood went to the Library of Congress in Washington, whom he had asked about sixteenth and seventeenth century maps. They obligingly produced several hundred for his inspection. He discovered that Antarctica is shown on several of them, generally drawn too large. On Mercator’s 1538 world map the continent is depicted as embracing Terra del Fuego, the Magellan strait being the only gap between it and South America. The Buache chart of 1754 shows it as two large islands, separated by a ‘Mer Glacia’ (frozen sea).


One problem that he and his students addressed was that of an island on the Piri Reis map that appeared to be Cuba, but was drawn vertically rather than horizontally. They tried various projections, that is, ways of representing a spherical surface on a two-dimensional map, and settled upon a Bonne Projection, as this might give such a distortion. Hapgood reproduced, in his 1965 Maps of the Ancient Sea Kings, a U. S. Air Force ‘Azimuthal Equidistant Projection centred near Cairo’, i.e. as the world might appear as viewed from a tremendous height above Cairo, and in this Cuba is vertical.

The Piri Reis map also shows a large island in the middle of the Atlantic. Its name is written in Turko-Arabic script, and is difficult to read as it occurs on a crease where the map was folded, but it may have read ‘Atland’, i.e. Atlantis. “Here, in this island, there might have developed the people who made these maps!” 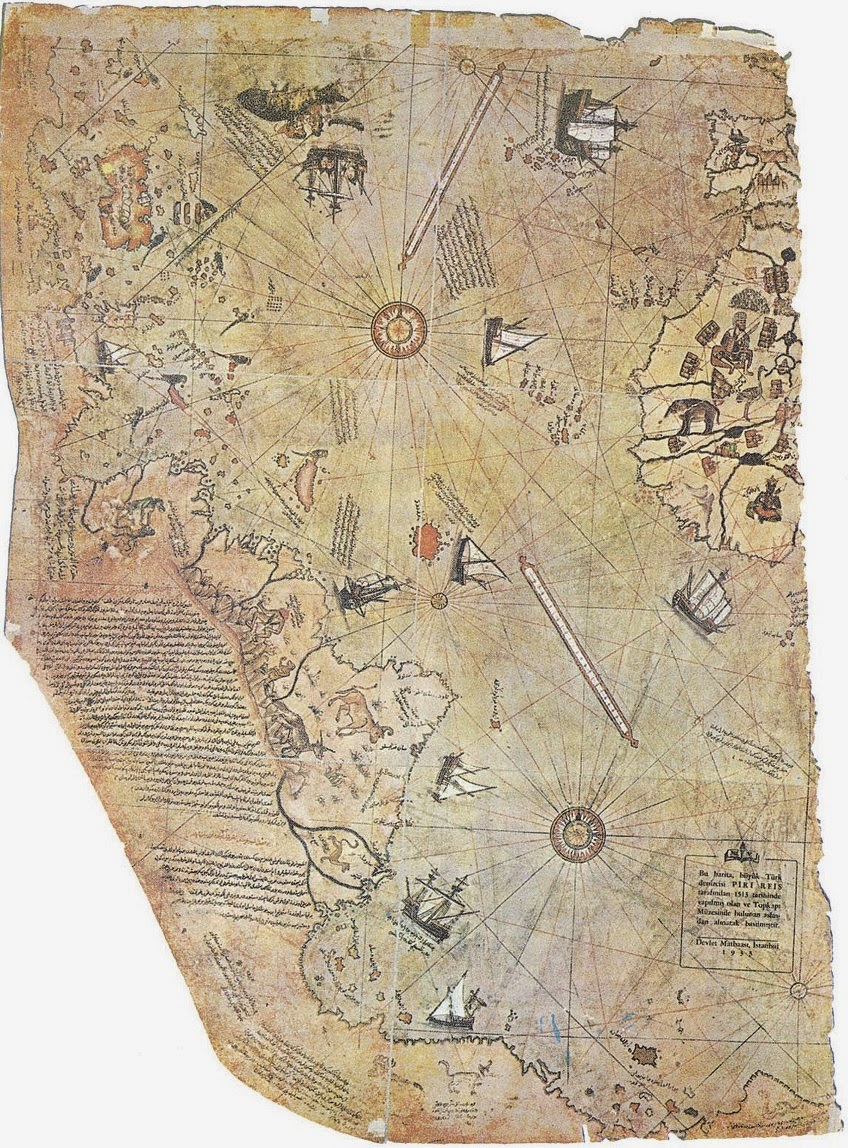 Erich von Däniken’s Chariots of the Gods? appeared (in German) in 1968. His third chapter, ‘The Improbable World of the Unexplained’, is a list of archaeological anomalies, many of them lifted from Pauwels and Bergier. The first was the Piri Reis map, for which he had bothered to read Hapgood, as he reproduced not only the map itself, but the Cairo projection. This he took as directly explaining the Piri Reis map: “A space-ship hovers high above Cairo and points its camera straight downwards . . . Admittedly the Turkish Admiral’s maps are not originals. They are copies of copies of copies.” (pp.30-31)

This book produced a greater volume of criticism than the text itself. On the present topic, Ronald Story (The Space-Gods Revealed, p.49) wrote that “The map is not by any means correctly drawn, and the identification of Antarctica without its ice cover is highly dubious”, but did not elaborate. A. D. Crown (in E. W. Castle & E. B. Thiering, eds., Some Trust in Chariots!!, p.28) produced an argument that it is hard to understand: “The great cape which forms the southern most point [of Brazil] on the map is Cape Sao Roque itself. Thus, despite the claim of von Däniken, Antarctica, echo soundings or no, is not shown on the map.” What he appears to have meant is that everything depicted south of Cape Sao Roque (the easternmost part of Brazil) was speculative, but even if so then it is remarkable that someone had correctly guessed the coastline of Antarctica. John Allan (The Gospel According to Science Fiction, p.12) asserted that “Antarctica is not shown, but Japan is . . . where Cuba ought to be,” without further explanation.

Notwithstanding these criticisms, others continued to enthuse. The astronomer Duncan Lunan (Man and the Stars, p.268) described Hapgood’s book as “by far the best evidence of [alien] Contact currently available.” There has been no shortage of Ancient Astronaut authors. Andrew Tomas (We Are Not the First, p.115) asserted that “The second map dated 1528 shows Greenland, Labrador, Newfoundland, a part of Canada, the east coast of North America to Florida.” In fact, the 1528 map is only a fragment, which shows the Caribbean but little else. In a similar vein Peter Kolosimo (Timeless Earth, p.232) said that “The only major error appeared to be that Greenland was shown in the form of three islands; but during the International Geophysical Year [1957] it was proved that this correctly represented the state of affairs over 5,000 years.” In this he was followed by W. Raymond Drake (Gods and Spacemen in the Ancient West, p.109), who refers to “. . . ice-free Greenland and three large islands, since confirmed by a French Polar Expedition”. To repeat, nothing north of Florida is shown at all, accurately or otherwise. It is hard to believe that these authors had actually looked at the map they were praising.

One who did study it was Robin Collyns (Did Spacemen Colonise the Earth?, p.94), who was struck by the presence of a lost island in the Atlantic: “Comparing the Piri Reis map with a Theosophical map of the ancient world, I was intrigued to see this same island, known in Theosophy as ‘Daitya’, a large Atlantean island, existing at precisely the same geographic location; but on the Piri Reis map, Atlantis itself seemed to have already sunk.” Brinsley Le Poer Trench (Secret of the Ages) mentioned the Piri Reis map to support his thesis that the earth is hollow and that UFOs come from the inside. Since the 1970s, Ancient Astronauts have gone out of fashion, but they have been supplanted by works on lost (advanced) civilisations, and Piri Reis is often brought in to support this, but that is a whole body of literature in itself which is too large to deal with here.

Drake (Gods and Spacemen Throughout History, p.67), typically observes that “The maps omit Atlantis, they date before the glaciation of Antarctica, perhaps between 10,000 and 8,000 BC”, and this approximate date is accepted by other writers. If Piri Reis were really able to access materials that old, it would mean that someone was making maps ten to twelve thousand years ago, which as far as we know is thousands of years before the invention of writing, or the creation of even the crudest early maps. Nevertheless, Antarctica did get onto some Renaissance charts. 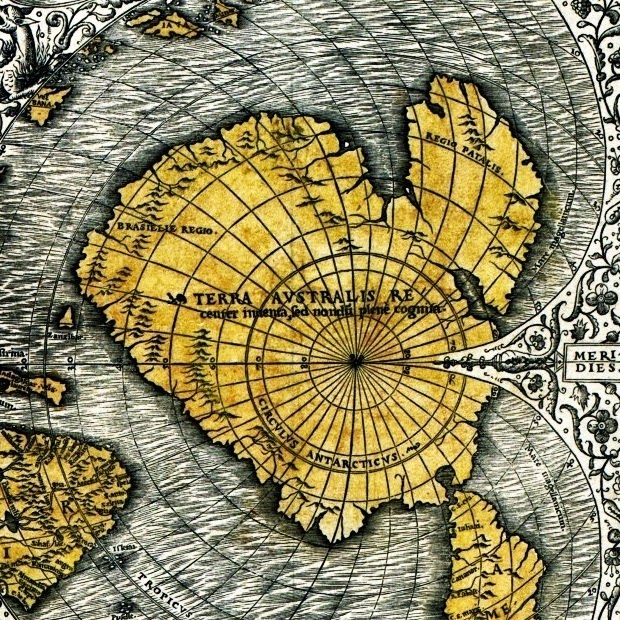 In my opinion there is a straightforward, if dull, explanation. The Oronteus Finaeusworld map of 1532 (above) shows Antarctica – drawn, as usual, too large – with the clear inscription Terra australis recenter inventa, sed nondum plene cognita, i.e. “The Southern Land, newly discovered, but not yet fully known.” The implication is that someone had sailed around the continent and roughly mapped it half a millennium before Dame Ellen Macarthur, and before 1513, perhaps about 1500. This was at a time when the Spanish and Portuguese had started sending ships on years-long voyages, so there should be nothing surprising about this. Thus, Antarctica was only re-discovered in 1818. Research into the archives of Spain and Portugal might uncover something about this, but it would be a monumental task, and anyway the records may be lost.

Two questions arise, if this hypothesis is correct. One is, why did some experts think that the maps showed Antarctica free of ice? Since no-one explains how they reached this conclusion, I cannot say. Secondly, how come this expedition became known to map-makers, but not to historians? I would tentatively suggest that tremendous excitement was aroused by reports of Central and South America with their large quantities of gold; whereas a landmass with nothing except snow and penguins generated no interest.

P.S. Would it be possible to pass a law compelling UFO authors to provide their books with indexes?
at July 24, 2017